It is with profound sadness that I share with you my reflections on the recent passing of Jagamara. Not only was he an internationally acclaimed artist and cherished family member, he was also a truly revered friend and inspiration to many.

Kumantye Nelson Jagamara commenced painting in the early 1980s in Papunya, Central Australia. A second-wave artist of the internationally renowned Western Desert art movement, he painted stories – taught to him by his grandfather Minjina Jakamarra - for Papunya Tula Artists Pty Ltd. He remained a shareholder of this company throughout his life. Much of Jagamara’s work focused on the Dreaming stories of the Mt Singleton area, including: Kangaroo, Yam, Possum, Bush Turkey, Goanna, Flying Ant, Rainbow Serpent and Lightning. In 1993 he received an Order of Australia Medal for services to Aboriginal art. 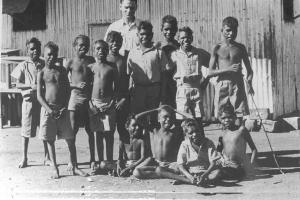 “Jagamara left school in Yuendumu at 13 after his initiation into Warlpiri law. He travelled north, droving cattle, shooting buffaloes on the Alligator Rivers, even a short stint in the army before heading back to Warlpiri country, settling finally in Papunya… Seeing him operate with effortless command of the English language and Western cultural mores, few realised that Jagamara’s life journey had begun ‘foot walking’ across his ancestral lands with his extended family.”

Jagamara’s first major achievement was winning the (inaugural) 1984 National Aboriginal Art Award (which has become known now as the Telstra Prize) with the painting Three Ceremonies. Following this, his career as an artist immediately soared, encompassing national public and corporate commissions, subsequent international recognition, and even celebrity status. The artist’s astonishing list of achievements during the 1980s is illustrated in Johnson’s words:

“His inclusion in the 1986 Biennale of Sydney made him the first Australian Indigenous artist to break through into contemporary international art circles and achieve individual recognition. In 1987, an 18-metre painting by Jagamara was installed in the foyer of the Sydney Opera House. “ 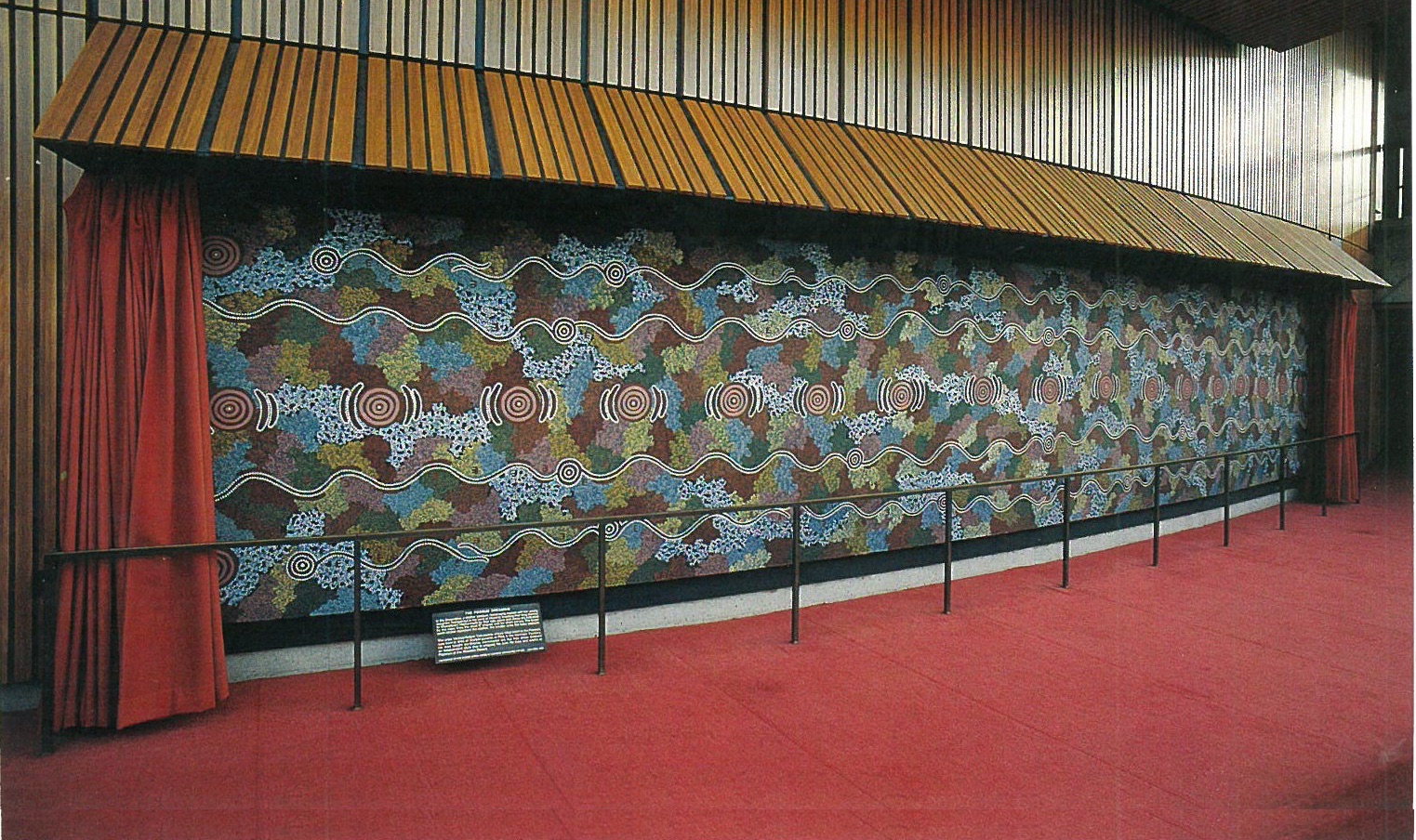 His 1984 painting Five Stories was one of the most reproduced works of Australian art in the 1980s – and remains so. It featured on the cover of the catalogue of the landmark 1988-89 Dreaming’s: The Art of Aboriginal Australia, the first major exhibition of Indigenous Australian art in the United States since the 1950s.”

At a Sotheby’s London auction in 2016, Five Stories was offered for sale for the first time since being first exhibited in 1984 and was purchased by a private collector in the USA for AUD$687,877 establishing what is still the highest price achieved for a living Indigenous artist.

Central to his legacy is the Parliament House Forecourt Mosaic, now a national icon, featuring on the $5 note. Jagamara stood beside the Queen and then Prime Minister Bob Hawke at the 1988 opening ceremony, explaining this gift from his people to all Australians, most especially his fellow Aboriginal Australians.”

Almost 30 years later in 2017 Jagamara was again invited, this time with Imants Tillers, to exhibit at Parliament House with a special exhibition Meeting Place, featuring solo and collaborative works including The Messenger 2014, purchased for the Australian Parliament House collection. 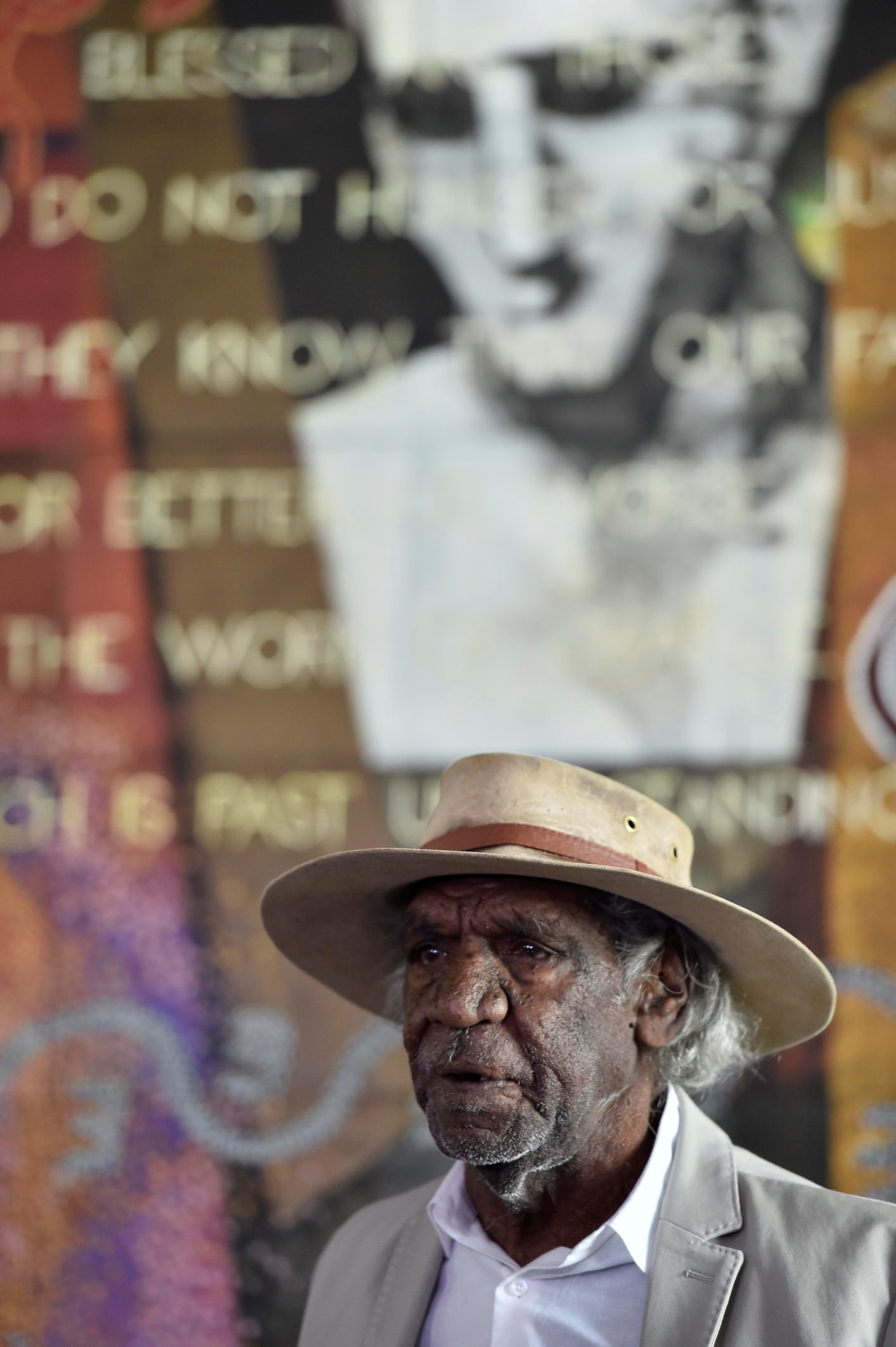 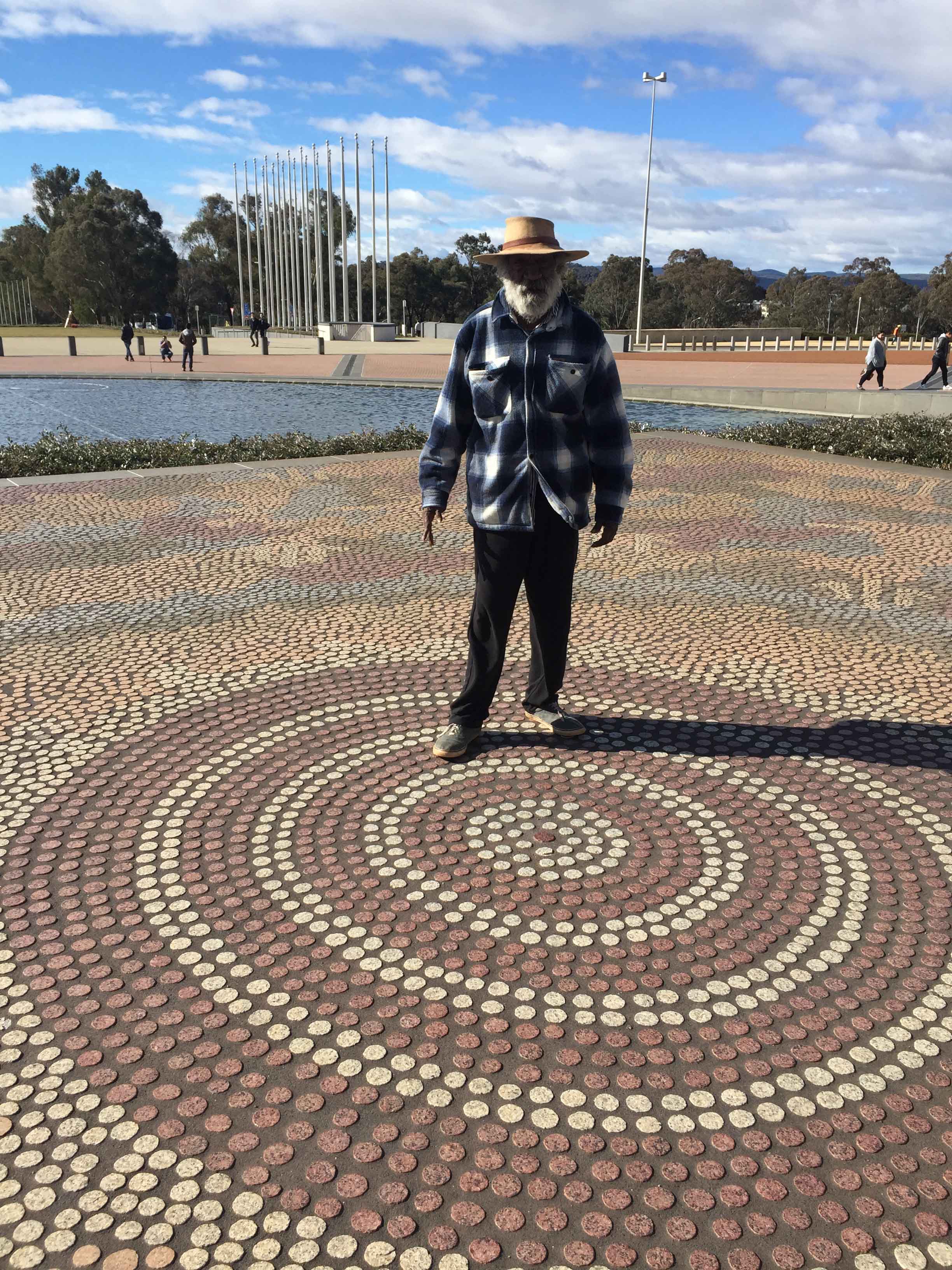 In 1996 Jagamara made the first of many trips to Brisbane. Alongside Paddy Carrol Tjungerrayi, he was featured with Campfire Group in “All stock must go!” in the Asia Pacific Triennial (APT2), in 1996 at QAG. From 1997, the Campfire Studios in Brisbane enabled Jagamara to begin experimenting with new compositions via drawings & mixed media on paper.

He was invited back as a solo artist for APT3 in 1999. These Brisbane visits cemented diverse creative and professional relationships, with Jagamara zealously developing new solo works and collaborations. With fellow international artist Imants Tillers, a collaborative series began in 2001, totalling over 24 works. Jagamara and Tillers first met in 1986 in Sydney whilst both exhibiting at the AGNSW, where Tillers’ work The Nine Shots featured recontextualised elements of Jagamara’s Five Stories.

Imants Tillers reflected in 2018 on this experience:

appropriation of an Aboriginal image] led later in 2001 to the beginnings of a long and fruitful process of collaboration with Michael Nelson Jagamara, which still continues today. Some have described it as ‘reconciliation through collaboration’.” 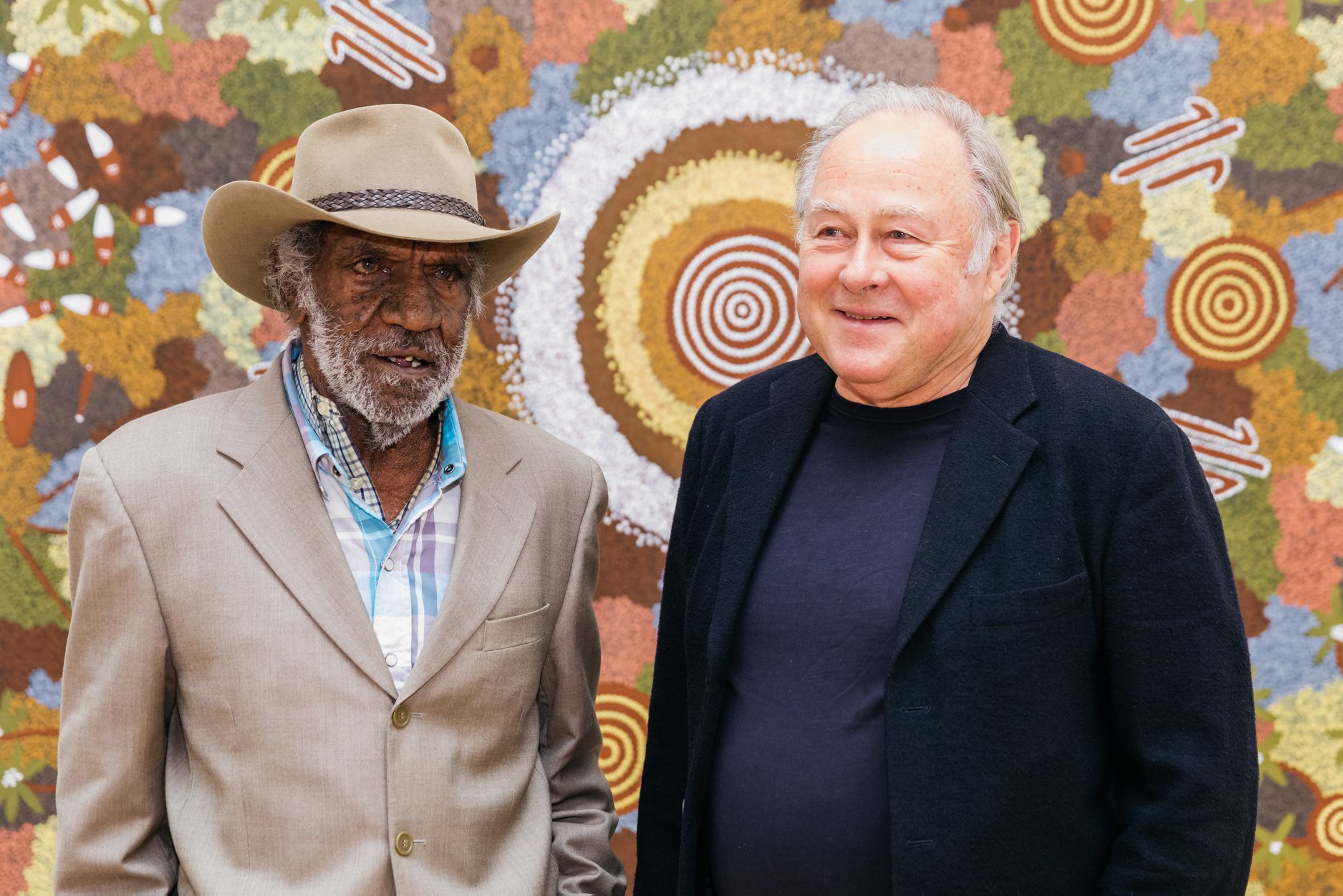 From the late 1990s until recently, Jagamara’s expressionistic ‘signature’ designs were also translated into prints, rugs and sculptures. Jagamara continued to make the salient point that, although the appearance of his artworks - colour, style, scale and materials - was continually being reformatted, his stories never changed.

The Lightning Strikes sculpture series, which began in 2014, is one such example. Fabricated firstly into polyurethane and later into bronze and stainless steel editions, the sculpture is based on an image distilled from the Warlpiri Rain & Water Dreaming narrative. This series has been widely exhibited in Brisbane, Mornington Peninsular, Sydney, Canberra and Hong Kong. 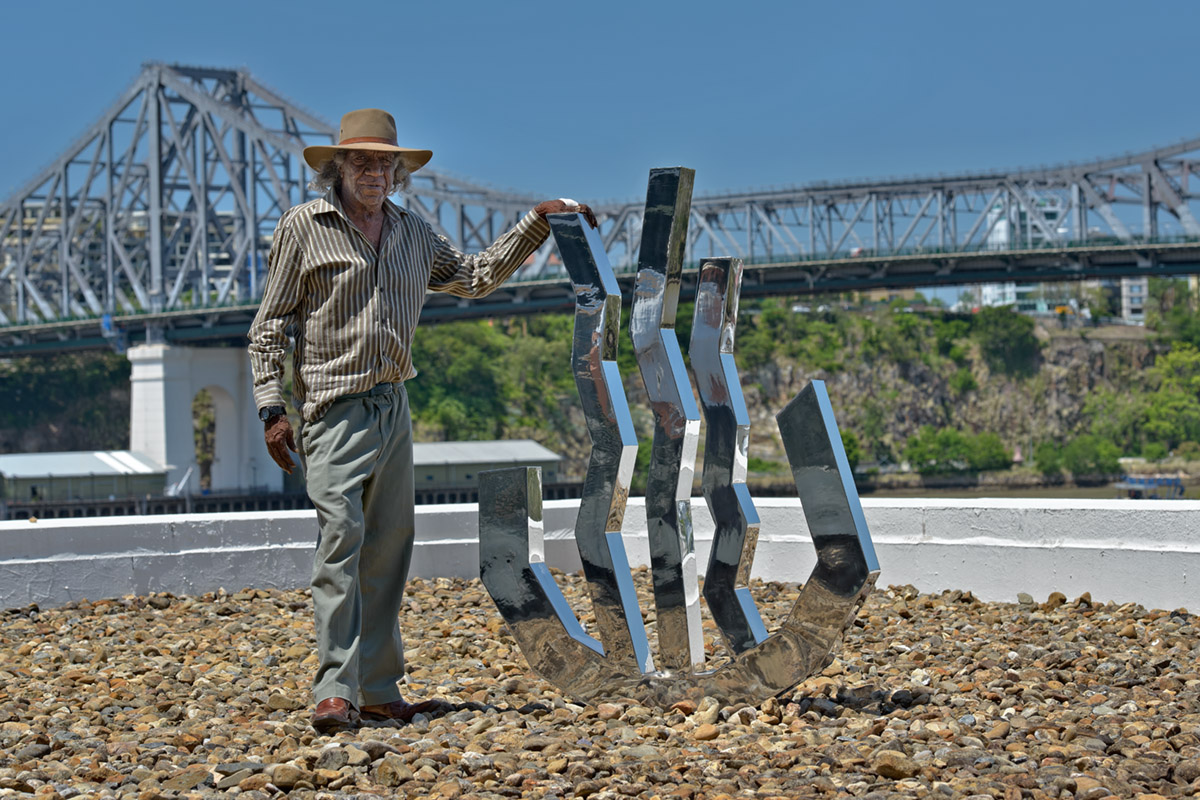 Jagamara’s contributions to the arts have been recognised with a host of accolades. In 2006 Jagamara was the winner of the prestigious Tattersall’s Club Landscape Art Prize, for his painting Moving Storm. Shortly after this, Jagamara received an honorary doctorate from the College of Fine Arts, University of New South Whales in 2008. 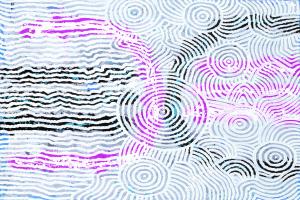 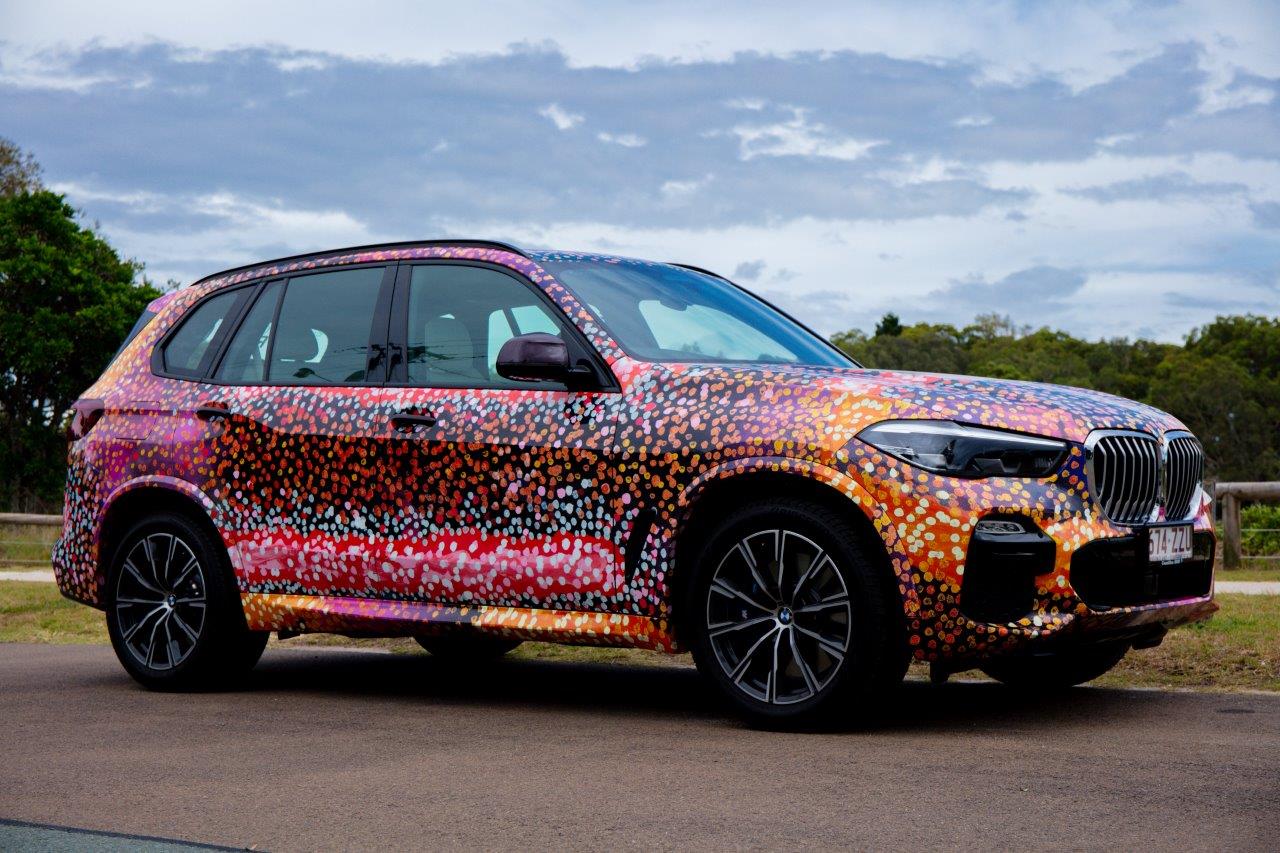 Jagamara will always be the bush gentlemen. With his jacket and Akubra hat, he displayed a marvellous humour and forthright dignity, whilst all the time sharing a multitude of Indigenous stories. From Papunya to New York, Alice Springs to Canberra, Brisbane to Vienna -- Jagamara would often enjoy quiet, confident chats with strangers, whether he met them casually at the airport or hotel, at gallery openings, waiting for a taxi or just meandering through a shop. He would usually introduce himself with a warm smile and a shake of the hand, announcing: ‘Hello, I’m a famous artist.’

Jagamara, what a legend! We will all miss you, the world over. 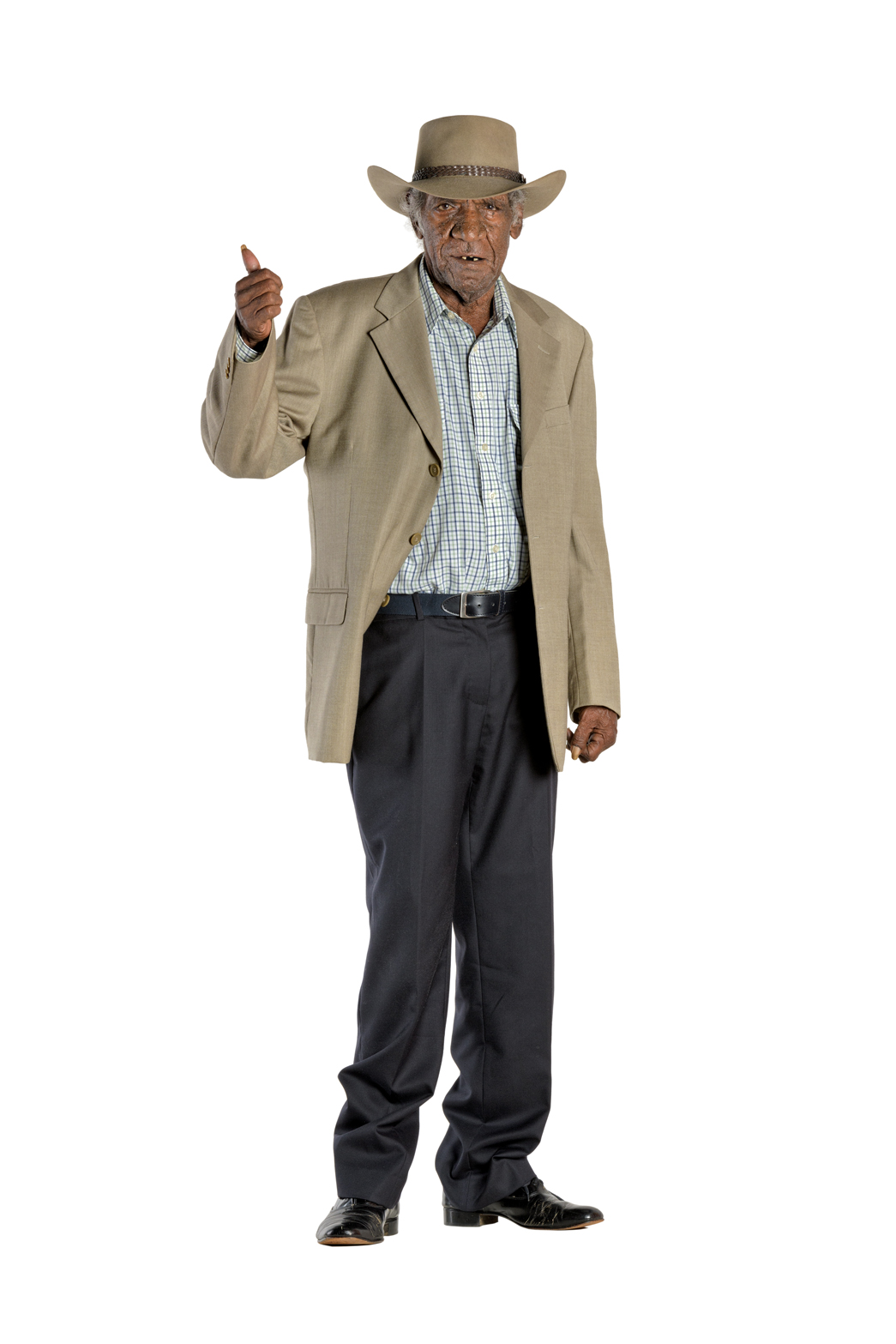